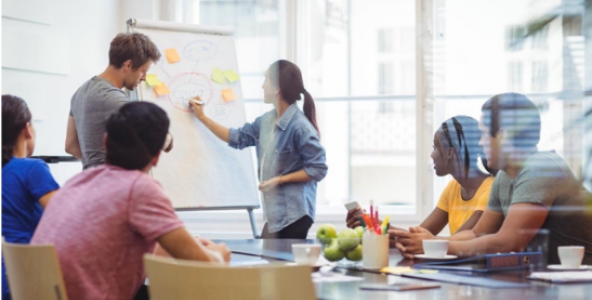 Managerial courage | How to assert one's demands within a framework of benevolence?

Managerial courage is a common expression, but we sometimes have trouble defining what it really means. Is it power? Determination? Willpower? Risk-taking? Responsibility?

"Nothing of the sort, in fact," says philosopher Eric Delassus.

Being courageous," he says, "for a manager, means having the strength to assume one's own vulnerability and to accompany that of others.

In other words, it is not a question of knowing how to take risks, launch projects or other initiatives that characterize audacity or entrepreneurship, but much more of daring to be in a relationship with others on a daily basis. This means being clear with oneself, aware of one's own strengths and limits so as not to weigh on others.

Emotions at the service of managerial courage

For a long time, it was frowned upon to dare to express one's emotions. Worse! It could be considered as an admission of weakness.

In reality, having managerial courage means accepting to take them into account, sometimes even feeling uncomfortable, and accepting to be afraid that the other person will be disappointed or no longer "likes" us, will get angry and perhaps not really know how to react.

The problem is that all these good reasons sometimes lead to doing nothing. This could be called managerial "cowardice" as opposed to courage!

It is true that we are not all equal when it comes to courage. Nevertheless, can we work on it to develop it?

Good news! The answer is yes!

Courage is a quality that is worked on, exercised and refined day by day by :

It is indeed important to know how to adapt to changes in the environment and to performance expectations, but also to remain clear-sighted in order to defend our positions and to maintain the vision that is the basis of our consistency

It is coherence that makes cohesion. Who has not had to make decisions in his or her managerial life and hesitate to backtrack because they were simply difficult to defend? Backing out without relevant elements and simply to lower the emotional charge would be the worst strategy and certainly the best way to weaken one's own credibility.

Mc Cormack, a very successful entrepreneur in the 80's, said in one of his books that he prefers an immediate "No" to a maybe that drags on forever. The latter ends up wasting his time because it almost always ends in a "No".

It is not the "No" that will remain in the other person's mind, but rather the way in which we accompany him or her to deal with or manage the consequences of the "No".

Isn't it also our difficulty in managing our emotions and particularly the fear of not being loved anymore, which makes us hesitate or even give up? Let's ask ourselves what we would like to see in our managers and let's try to apply it to ourselves in our relationship with our colleagues.

Who has never hesitated to give corrective feedback, who has ever met employees suffering from an overdose of recognition?

But how can we achieve this if we don't take our courage in both hands to approach the point with calm, lucidity, objectivity and above all a constructive state of mind?

Giving feedback is a gift to the other person, provided that it goes beyond the stage of observation and emotion.

Managerial courage also means taking care of those for whom you are responsible. It means relaying various acknowledgements, filtering stress, but it also means defending the team's projects and ideas when you are convinced of them.

An opposite attitude could only be a source of misunderstanding, even resentment, or even demotivation.

Now, isn't the manager's courage also to know how to question oneself?

Now, isn't the manager's courage also to know how to question oneself?

Acknowledging and assuming one's mistakes, accepting and integrating the feedback given to us, always striving to do better, showing loyalty and integrity are certainly the most powerful factors of exemplarity.

That said, beware! The courageous manager is not a hero. If they are not afraid of their hierarchy or their teams, they are capable of taking a step back before making a decision.

A lax manager can do as much damage as an authoritarian manager. Managerial courage allows us to establish legitimacy based on the quality of the relationship and not on the power that comes with a status.