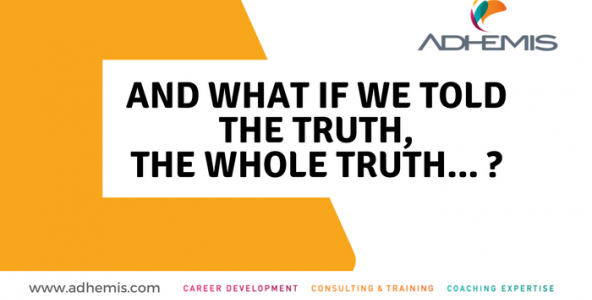 And what if we told the truth, the whole truth…? By Linda Belzile Buisson

I remember walking into that meeting room like it was yesterday. An intimidating array of leaders including the national communications manager, the national HR executive, and the head of national marketing, all sat huddled together under the pretext of discussing an ongoing HR matter. I‘d also been invited to attend the meeting which had been called, or so I thought, to brainstorm ideas around high levels of staff turnover.

Relatively new to my role and corporate life in general, I was both very flattered and rather nervous to be sitting at a table with all these leaders. I also thought that by being invited to the meeting, someone thought I had something to contribute. Conscious that I still had lots to learn, in my typical make-sure-you-have-the-facts-before-speaking approach, I listened. And I listened some more. I was in my late 20s at the time and having been brought up with a mother who always said that as long as you show up and do the best you can, anything is possible…until it wasn’t.

What felt like hours passed, as we discussed different ways to address the turnover issue that the organisation was facing. We debated whether it was normal for our industry to have a high level of staff turnover, and questioned if we really should be so worried about the issue. There was even talk of distributing regular internal  communications that had messages about how great it was to work for the organisation. Throughout the meeting, I couldn’t help thinking to myself "what is this meeting really about?"

As I was listening, it occurred to me that the real nexus of our conversation was about how our colleagues might be feeling and what they were thinking. Nobody could really articulate their temperatures, though, because no one had bothered to ask ! I wondered how we could be making decisions based on one side of the story only, and raised my hand to ask "what if we asked our people to tell us, honestly, why they are unhappy before they leave?” I explained that rather than speculating, we could address the issue from the actual source BEFORE people left in droves. Duly informed, I contended, “wouldn’t we’d then be able to put the most appropriate solutions in place in order to ensure people choose to stay?"

My question was met with some eye rolling and subtle sniggering before the head of internal communications interrupted "we’ll never be able to do that!" The meeting continued with smoke and mirror discussion where those present debated the approaches they’d use to address the turnover issue.

The company I’m referring to is an amazing one…on paper. It wins awards all over the world for all the great work it does and all the great policies it has. It’s consistently rated as one of the best places to work…by people on the outside looking in.

I tell you this story not because it’s unique or because it’s something that only happens in certain companies and in certain industries. I tell the story because it’s a situation that happens regularly everywhere, regardless of the industry. It’s a story about how in 2017 leaders still believe pretending, covering up and not having difficult conversations continues to be the standard way of doing things. And why? “Because that’s how we’ve always done it here” the leaders will say.

The issue is that when hide the truth and we avoid addressing the root cause, it’s like we as leaders are offering potential and existing employees a magnificently beautiful gift with impeccable wrapping and immaculate ribbons and bows however once they open the box they quickly discover that what’s inside is not so great after all.

People all over the corporate world are sitting in meetings hiding, pretending and putting on masks. As a result, everyone is suffering because they are being shown that it’s right and more acceptable to pretend, to agree when really you disagree and to turn a blind eye to what’s really bothering them instead of speaking the truth.

The truth is that the company I referred to earlier, and others like it, are not all bad. They’ve created good foundations which have allowed them to be successful in the past few decades. They’ve been successful in many areas however the lack of honesty and vulnerability can only go so far…and then things start to fall apart.

Have we forgotten what happened to Enron? Lehman Brothers?

The challenge we now face as leaders is to recognise the human instinct to explore and grow and bring that into our organisational cultures in a way that works.

People yearned to step foot on the moon, and dared to discover the depths of the seas. And, unless we’re willing to be open to exploration within our own teams and organisations, it’s our organisations that are likely going to fall behind or die slowly and our people will just move on to something else.

Consider that a 2016 survey conducted by CompData surveys in the US showed that all industries combined, there was a 17.8% turnover in 1 year. When you know the cost of turnover, in a climate of doing more with less, isn’t it time we start looking at new ways of cutting costs that will increase employee engagement and reduce turnover rather than contribute in it?

Using an old model in a new reality is a very precarious thing to do. In a world of Google, Facebook, Tinder, Twitter and #metoo, or where you can have whatever you want instantaneously, the old paradigm of pretending things are OK when clearly they are not is no longer sustainable and quite frankly harmful to individual and to the future of organisations as a whole.

We have access to more information we could ever dream of needing. Yet people are starved for connection and meaning more than ever. In a world where within seconds, we can know something has taken place on the other side of the globe with a touch of a screen, we need to recognise that our honesty, vulnerability and transparency as leaders has a direct impact on the contribution our people will make to help them and the organisation thrive. The less transparent, honest and vulnerable employees feel the leadership is being with them, the more they will find a way to meet their needs elsewhere.

As risky and foreign as it sounds to bring honesty, vulnerability and facing our fears into the corporate context, know that it will be a small price to pay once turnover reduces, employee engagement significantly increases and the bottom line grows!